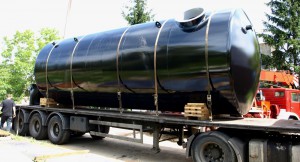 In the group of underground tanks we have single-walled tanks for drinking, rain and fire extinguishing water as well as for other liquid substances.

Metal Zbiorniki is a manufacturer of drinking water tanks. The underground tanks we manufacture serve both to store drinking water and to compensate for temporary fluctuations due to changing water requirements. In addition, the tanks can also be used as water storage for fire extinguishing purposes and as tanks for storing excess rainwater.

Our tanks are certified by the National Health Institute. The tanks are protected against corrosion on both sides. The inner surfaces of the tanks that come into contact with drinking water are protected by coatings certified by the Polish National Health Institute (PZH). A special thick layer of polyurethane primer enamel is applied to the outer surfaces of the tanks, which is suitable to be buried in the ground.

We manufacture the tanks using our own documentation or the documentation entrusted to us by the customer. The underground tanks we manufacture can be placed on a foundation buried in the ground, a base made of compacted sand and cement or an embankment in the ground, depending on the soil and the water conditions. Our underground tanks are mostly cylindrical with a horizontal axis, closed with convex bottom plates in accordance with the standard PN-EN 12285-1.

Below is a size chart for the main model series of underground water tanks we manufacture. We manufacture tanks with other, intermediate dimensions also.

Tanks not included in the model series

At the customer’s request and after individual consultation we manufacture tanks with other dimensions. 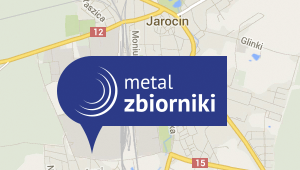 We are waiting for your inquiry